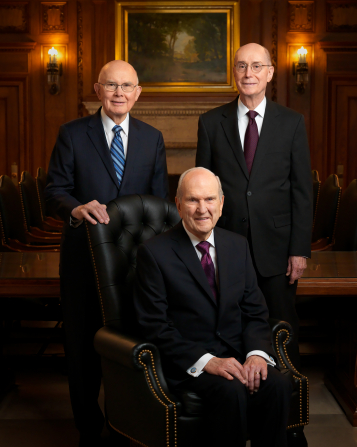 It seems that there are some members in the Church who want to believe that its leaders do not or should not make any mistakes. People want to view these leaders as being infallible. After all, if God speaks with them, can He not just tell them the right thing to do the first time?

Or does He allow them to make mistakes in their leadership callings? Do they not grow and progress as any other person does? Mankind consists of imperfect human beings. Our Church leaders do the very best that they know how and the Lord consecrates their efforts. They certainly are not infallible.

Joseph Smith taught, “I told them I was but a man, and they must not expect me to be perfect; if they expected perfection from me, I should expect it from them; but if they would bear with my infirmities and the infirmities of the brethren, I would likewise bear with their infirmities.” (Teachings of the Prophet Joseph Smith, Joseph Smith, 268)

The leaders of the Church do the absolute best that they can. They are some of the best people on the earth today. But they are in no way infallible. They make mistakes, just like the rest of us do.

“Some struggle with unanswered questions about things that have been done or said in the past. We openly acknowledge that in nearly 200 years of Church history—along with an uninterrupted line of inspired, honorable and divine events—there have been some things said and done that could cause people to question.

“And, to be perfectly frank, there have been times when members or leaders in the Church have simply made mistakes. There have been things said or done that were not in harmony with our values, principles, or doctrine. I suppose the Church would be perfect only if it were run by perfect beings. God is perfect, and His doctrine is pure. But He works through us—His imperfect children—and imperfect people make mistakes.

“It is unfortunate that some have stumbled because of mistakes made by men. But in spite of this, the eternal truth of the restored gospel found in The Church of Jesus Christ of Latter-day Saints is not tarnished, diminished, or destroyed.”

Leaders of the Church are human beings, just like the rest of us. We all make mistakes. So do they. However, that does not mean that the Gospel as taught by the Church is any less than perfectly true.

President Brigham Young also had some thoughts on the matter. He said:

“Can a Prophet or an Apostle be mistaken? Do not ask me any such question, for I will acknowledge that all the time, but I do not acknowledge that I designedly lead this people astray one hair’s breadth from the truth, and I do not knowingly do a wrong, though I may commit many wrongs, and so may you. But I overlook your weaknesses, and I know by experience that the Saints lift their hearts to God that I may be led right.”

Let us discuss two examples of some mistakes that have been made. One by a Prophet, and one by a General Authority who later became an Apostle. When Joseph Smith had translated 116 pages of the Book of Mormon, he lent them to Martin Harris. This resulted in the loss of these pages. From Joseph Fielding McConkie, we read, “It will be recalled that Joseph Smith was severely disciplined by the Lord for the loss of the 116 manuscript pages of the Book of Mormon. Because of the Prophet’s disobedience, the Lord withdrew his Spirit from Joseph Smith and allowed him to walk in darkness (see D & C 10:2; 19:20). Speaking of those events the Lord said, ‘How oft you have transgressed the commandments and the laws of God, and have gone on in the persuasions of men…. You should have been faithful; and he would have extended his arm and supported you against all the fiery darts of the adversary, and he would have been with you in every time of trouble’ (D & C 3:6-8).” (Answers: Straightforward Answers to Tough Gospel Questions, Joseph Fielding McConkie)

So even Joseph Smith made some mistakes. How could we hold anyone else to a higher bar? They are growing and learning and progressing just like everyone else is.

Let us consider a case involving Bruce R. McConkie. He had written and published a book called “Mormon Doctrine” during the presidency of David O. McKay. The story continues:

“McKay’s first step was to obtain a copy of the book and study it. One of his secretaries noted, ‘He went through the whole thing. He had paper clips [on the pages where he had a question], and there were hundreds of them there’ Then he summoned two senior apostles, Mark E. Petersen and Marion G Romney. ‘I asked them if they would together go over Elder Bruce R. McConkie’s book, Mormon Doctrine and make a list of the corrections that should be made preparatory to his sending out an addendum to all members of the Church who have purchased his book.’ Having a General Authority send such an addendum would have been unprecedented, an indication of the seriousness with which McKay took McConkie’s breach of propriety.

“Peterson and Romney took ten months to critique the book and make their report to the First Presidency. Romney submitted a lengthy letter on January 7, 1960, detailing what he felt were the most egregious errors in the book and noting: ‘Its nature and scope and the authoritative tone of the style in which it is written pose the question as to the propriety of the author’s attempting such a project without assignment and supervision from him whose right and responsibility it is to speak for the Church on ‘Mormon Doctrine.” On the same day, Peterson gave McKay an oral report in which he recommended 1,067 corrections that ‘affected most of the 776 pages of the book.'”

Eventually it was all sorted out, but President McKay certainly felt that it was an appreciably large mistake.

Though there are more examples, it would be error to dwell further upon our wonderful leaders’ mistakes. It is a very valuable thing to keep in mind that our leaders, though they do the best they can, are not perfect, neither do they claim to be. We absolutely do our best to sustain and uphold them, especially in their weaknesses. The point, though, is that we cannot expect them to be perfect in everything they do, all the time. They do their best just like we do. It is quite important that we remember this.

For further thoughts on this concept, see “Sustaining Our Leaders.”

Sometimes we may question whether direction that comes from our leaders is truly inspired. We wonder if we are the best person suited for the calling or whether it truly came from the Lord. Perhaps we take issue with correction that we have received from our bishop.

Let’s take a look at what the scriptures say about this. In Doctrine and Covenants 1:38, it says:

“What I the Lord have spoken, I have spoken, and I excuse not myself; and though the heavens and the earth pass away, my word shall not pass away, but shall all be fulfilled, whether by mine own voice or by the voice of my servants, it is the same.”

We can see that if direction or correction comes to us from a leader, we are to consider it as having come from the Lord. As far as we are concerned, their direction should be considered as law for us. We should also remember that we have sustained them.

When we sustain someone, we let the Lord know that we will uphold them. We make a promise. Regarding this, President Henry B. Eyring has said:

These humble servants of Heavenly Father have been called by inspiration to the positions which they hold. They carry the mantle of that calling. Part of that mantle is the ability to receive revelation regarding the fulfilling of that calling.

In the Institute manual for the Doctrine and Covenants, Section 1, we are informed:

“No man, however strong he may be in the faith, however high in the Priesthood, can speak evil of the Lord’s anointed and find fault with God’s authority on the earth without incurring His displeasure.”

What can we do if we find ourselves at odds with one of our leaders? First off, we would do well to internalize D&C 1:38 that we reviewed above. Also, we could pray to have a testimony of their direction and for the desire to follow it. We could fast for them that they might be inspired to do and speak the will of the Lord.

If your bishop gives you council, the very best thing you can do in the Lord’s eyes is to follow it. Do as you are directed, and the Lord will bless you for it. I have seen this happen in my own life.