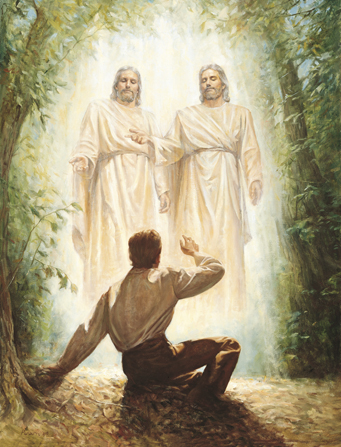 In the scriptures, there are a handful of passages that people of different faiths interpret in a wide variety of ways. One of those seems to be Matthew 16:15-18. Let’s see what we can learn from it. The text is thus:

16 And Simon Peter answered and said, Thou art the Christ, the Son of the living God.

17 And Jesus answered and said unto him, Blessed art thou, Simon Bar-jona: for flesh and blood hath not revealed it unto thee, but my Father which is in heaven.

18 And I say also unto thee, That thou art Peter, and upon this rock I will build my church; and the gates of hell shall not prevail against it.

In verse 15, Christ is asking Peter who the Apostles say that Christ is. Verse 16 states that Peter said that he was Christ, the Son of the living God.

Verse 17 says that Peter’s testimony did not come from any earthly source. It came from God himself. This is, of course, through the witness of the Holy Ghost. In other words, it was a revelation. In verse 18, Christ continues talking about revelation. He says “upon this rock I will build my church.”

Let’s see what Howard W. Hunter says about this passage. He declares:

“This is a very significant statement. The Lord in effect said to Peter that this knowledge that Jesus was the Christ did not come to him from mortal men or from the reasoning or learning of men, but by revelation from on high, that is, direct, divine revelation of the divinity of the Master. In answer to the statement ‘Thou art the Christ’ Matt. 16:16 Jesus replied, ‘. . . thou art Peter’ Matt. 16:18 in friendly acknowledgment of his disciple. The Lord then added, ‘. . . and upon this rock I will build my church’ Matt. 16:18 Upon what rock? Peter? Upon a man? No, not upon a man, upon the rock of revelation, the thing which they were talking about. He had just said, ‘. . . flesh and blood hath not revealed it unto thee, but my Father which is in heaven’ Matt. 16:17 This revelation that Jesus is the Christ is the foundation upon which he would build his Church.”

Let’s take a look at some scripture passages:

18 Where there is no vision, the people perish: but he that keepeth the law, happy is he.

Where there is no vision, or revelation, the people perish. Things don’t go so well for them.

7 Surely the Lord God will do nothing, but he revealeth his secret unto his servants the prophets.

I’m not sure what your definition of “nothing” is, but to me, this scripture says that the Lord doesn’t do a single thing without first revealing it to his servants, specifically the prophets.

Taken together, these two scriptures plus the opening passage from Matthew seem to indicate that revelation is part of how the Church must work. If a church exists, but is not run by revelation, it cannot be Christ’s church.

What does this imply?

For one thing, if we have continued revelation, that must mean that the canon is open. The Prophet continues to receive revelation for us in our day. We know this, because we hear his counsel at least twice a year at General Conference. We would do well to heed and follow what he says.

Also, it means that the prophet is more important to us than the scriptures. For a full article on this, take a look at “Do We Need Scriptures?” A living prophet should be much more valuable to us than a dead one.