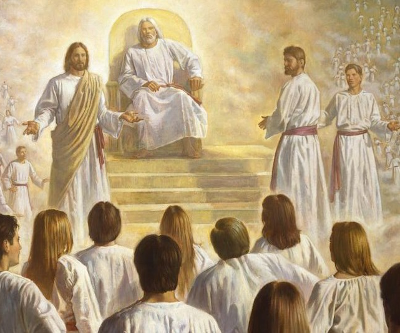 Recently, I was asked how much of our circumstances in this life stem from our valiance in our pre-mortal life. Though I cannot answer that question with absolute precision, we can certainly take a look at what the scriptures state. It would also be of value to consider what has been said on the topic.

53 The Prophet Joseph Smith, and my father, Hyrum Smith, Brigham Young, John Taylor, Wilford Woodruff, and other choice spirits who were reserved to come forth in the fulness of times to take part in laying the foundations of the great latter-day work,

54 Including the building of the temples and the performance of ordinances therein for the redemption of the dead, were also in the spirit world.

55 I observed that they were also among the noble and great ones who were chosen in the beginning to be rulers in the Church of God.

56 Even before they were born, they, with many others, received their first lessons in the world of spirits and were prepared to come forth in the due time of the Lord to labor in his vineyard for the salvation of the souls of men.

Many of the noble and great ones were reserved. So there was clearly gradations in valiance among spirits. We also learn something about this in Abraham 3:22-23, which says:

22 Now the Lord had shown unto me, Abraham, the intelligences that were organized before the world was; and among all these there were many of the noble and great ones;

3 And this is the manner after which they were ordained—being called and prepared from the foundation of the world according to the foreknowledge of God, on account of their exceeding faith and good works; in the first place being left to choose good or evil; therefore they having chosen good, and exercising exceedingly great faith, are called with a holy calling, yea, with that holy calling which was prepared with, and according to, a preparatory redemption for such.

They were prepared from the foundation of the world on account of their exceeding faith and good works, in the first place (or first estate) being left to choose good or evil. They chose good and exercised great faith. Because of that, they were called to “this holy calling.” So they received particular blessings because of their valiance in the pre-mortal life.

There are several quotes about this that I would like to share, as well. We have this from Joseph Fielding Smith:

“During the ages in which we dwelt in the pre-mortal state we not only developed our various characteristics and showed our worthiness and ability, or the lack of it, but we were also where such progress could be observed. It is reasonable to believe that there was a Church organization there. The heavenly beings were living in a perfectly arranged society. Every person knew his place. Priesthood, without any question, had been conferred and the leaders were chosen to officiate. Ordinances pertaining to that pre-existence were required and the love of God prevailed. Under such conditions it was natural for our Father to discern and choose those who were most worthy and evaluate the talents of each individual. He knew not only what each of us could do, but what each of us would do when put to the test and when responsibility was given us. Then, when the time came for our habitation on mortal earth, all things were prepared and the servants of the Lord chosen and ordained to their respective missions”

This comes from Doctrines of Salvation:

“There were no neutrals in the war in heaven. All took sides either with Christ or with Satan. Every man had his agency there, and men receive rewards here based upon their actions there, just as they will receive rewards hereafter for deeds done in the body”

From Norman W. Gardner, we have this:

In our premortal life, we were taught lessons that prepared us to assist Heavenly Father in bringing about the salvation of His children (see D&C 138:56). We also had the agency to follow and obey God. Some of Father’s children distinguished themselves through their “exceeding faith and good works” and were foreordained, or given assignments, to serve in specific ways on earth (Alma 13:3). The greatest of those who followed Heavenly Father back then was His firstborn spirit son, Jesus Christ—or Jehovah, as He was known there.

What We Know about Premortal Life, By Norman W. Gardner, Seminaries and Institutes

From these [John 10:14,27; Rom 8:17,29; 9:11; Eph 1:4] and a host of other passages, it is clear that people do not all have the same talent for recognizing truth and believing the doctrines of salvation. Some heed the warning voice and believe the gospel; others do not. (Page 34.) No two persons are born with the same talents and capacities; no two are rooted in the same soil of circumstances; each is unique. The cares of this world, gold and honor and power and renown, the lusts of the flesh, the chains of past sins, and a thousand other things — all exert their influence upon us. But in the final sense the answer stems back to premortality…. And the talent of greatest worth was that of spirituality, or it enables us to hearken to the Holy Spirit and accept that gospel which prepares us for eternal life. Men are not born equal. They enter this life with the talents and capacities developed in preexistence….

Bruce R. McConkie, A New Witness for the Articles of Faith, pg 33.

I have called attention to these passages to prove that there were some spirits who dwelt with God, so wicked and rebellious that they had to be cast out of heaven, and became the devil and his angels; as well as some who had developed such nobility of character, that God had set them apart or ordained them to be his rulers. Between these two extremes of good and bad, obedient and rebellious were, I doubt not, all degrees of faithfulness and nobility of conduct; and I hazard the opinion that the amount and kind of development in that pre-existent state influences the character in this life, and brings within reach of men privileges and blessings commensurate with their faithfulness in the spirit world. Yet, I would not be understood as holding the opinion that those born to wealth and ease, whose lives appear to be an unbroken round of pleasure and happiness, must therefore have been spirits in their first estate that were very highly developed in refinement, and very valiant for God and his Christ.

So it’s quite clear that we received some blessings here in this life based off how valiant we were in the pre-mortal life. What other quotes or scriptures do you know of regarding this topic?